Oliphant's life was interesting enough while he was alive.   He traveled extensively, a friendly British eye in a suspiciously convenient number of political hot-spots, he was an early Zionist, and in later life became entangled with mysticism.

The Trans-Caucasian Campaign was fought as part of conflicts between Russia and the Ottoman empire, Oliphant's friendship with Omer Pasha allowed him to follow the General through the war.

Oliphant's biographer, A. Taylor, identifies him as a British Secret Agent and it is in this role he finds his way, along with Ada Lovelace and Kurt Godel,  into the award winning The Difference Engine,  a steampunk alternative history coauthored by William Gibson and Bruce Sterling. 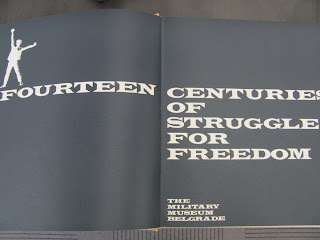 As in the case of our Military Museums Library, many of the books in the Chicksands Collection were also gifts. Fourteen Centuries of Struggle for Freedom was published by The Military Museum (Vojni muzej Beograd) in Belgrade (in what was then Yugoslavia) in 1968.

In 1973, Peter Carington, 6th Baron Carrington, visited the Museum in his role as Defence Minister of Great Britain. He went on to serve as British Foreign Secretary (1979-1982) and as the sixth Secretary of NATO (North Atlantic Treaty Organization) from 1984 to 1988. 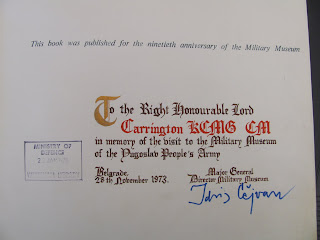 A presentation copy of the book was formally inscribed to Carrington, using Olde English Texte calligraphy (thanks to Donna Zambory for that information) to commemorate his visit on November 28th 1973.

In turn, Carrington presented it to the Defence Library in January 1975. 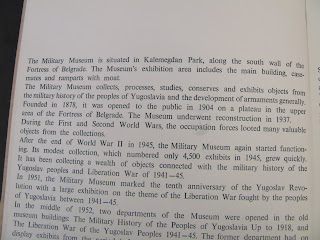 As the history of a military past that has changed radically in the past quarter century this book is a fascinating remnant of the former Yugoslavian armed forces. It is also a lesson in documenting the formation and growth of a military museum.

The Museum, founded in 1878, holds weapons from the Greek and Roman periods, through the Middle Ages, to tanks liberated from both the Allied & Axis forces during World War II.

The Museum, which is now located in Serbia, continues to document military history. Recently, an exhibit featured remnants of a US stealth aircraft downed by the Serbians during the recent war.

Thanks to Allison Wagner for pointing out this title.
Posted by Jan Roseneder at 12:43 PM No comments: Among the many subjects covered by the Chicksands Collection is Military Biography and this volume is one of the more splendid in the French section.


Gaston de Raimes (1859-1917) wrote a number of military histories, his most famous being the 3-volume set of Soldats de France: Actions Heroiques and a single volumes of Les Marins de France. Soldats de France is illustrated by Henri Pille.

Charles Henri Pille (1844-1897), French painter and illustrator, was especially known for his line drawings and contributed to a number of volumes published during the late 19th century. The first volume of Soldats, Generaux de la republique, demonstrates the wonderful pen and ink drawings of Pille and the binding is an excellent example of the gilt decorative binding of that time period. 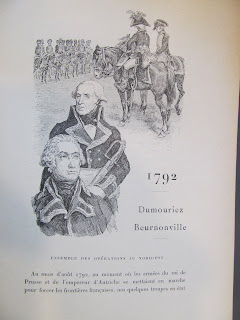 The many generals and commanders in this volume present a wide range of French military persuasions. For instance, Charles-François du Périer Dumouriez (1739-1823), pictured above, shared the victory at Valmy with General Francois Christophe Kellermann. Later, however, Dumouriez deserted from the Revolutionary Army, after failing to prevent the execution of Louis XVI in 1793. He fled to the Austrians and served with various continental armies before settling in Britain. Years after his death, his role as an advisor to the British as they fought Napoleon was revealed.
Posted by Jan Roseneder at 12:43 PM No comments: 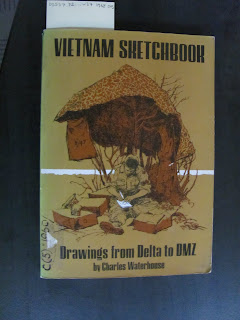 drawings from Delta to DMZ.

The work of war artists is more commonly seen in art works but is occasionally compiled in books. Charles Waterhouse served as a Marine during World War II and despite being wounded (resulting in nerve damage to his left hand) he went on to a successful art career. In 1992, he became "USMC Artist in Residence" and was promoted to the rank of Colonel in the Marine Reserves.

The sketches in this volume were completed during March 1967, midway through the Vietnam War. Waterhouse was deployed as a war artist in South Vietnam on three separate tours, documenting the activities of the US Navy and Marine Corps for their individual Combat Art Collections.

Waterhouse went on to produce works documenting Marine activities up to Desert Storm and the Iraq War.

Posted by Jan Roseneder at 10:15 AM No comments: 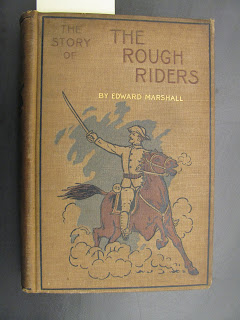 This is a history of the 1st U.S. Volunteer Cavalry in the Spanish-American War, fought in 1898 in Cuba. Teddy Roosevelt was the most famous Rough Rider and is quite possibly the inspiration for this cover. The illustrator, Richard F. Outcault, began his career as a technical illustrator for Thomas Edison and gained fame as the creator of “Yellow Kid”, the first colour cartoon strip.

Posted by Jan Roseneder at 10:36 AM No comments: 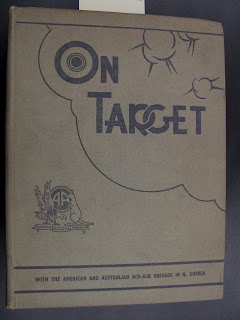 During the Second World War, the conflict in the Pacific Theatre ranged over a wide area of the globe, from northern India and Burma to the Marshall Islands, south to the island of New Guinea.
The Australian Anti-Aircraft Artillery was posted to New Guinea in February 1941 and were joined by American forces after the United States entered the war. On Target with the American and Australian Anti-Aircraft Brigade in New Guinea was published in Sydney Australia by Angus & Robertson, in 1943. 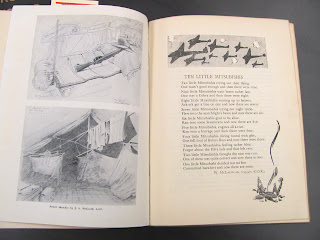 "Written and illustrated by men of the Front Line Forces", it contains factual and historical accounts, photographs, poetry, doggerel, drawings, cartoons and many other works depicting the attitude of the time and the activities of the troops stationed on the island.


While the majority of the contributions centre on 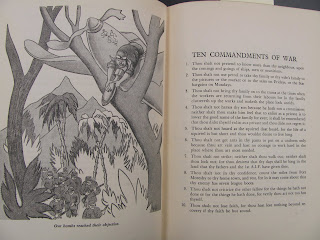 war-time operations, some of the photographs in
particular are considered to be unique in
documenting the ethnography of areas and tribes
within what is now Papua New Guinea.

Posted by Jan Roseneder at 3:09 PM No comments:

The Malakand Campaign of 1897

Winston Churchill’s first published work of non-fiction was The Story of the Malakand Field Force: An Episode of Frontier War published in 1898. It details a military campaign on the Northwest Frontier, in an area of what is now Pakiston, close to Afghanistan. Churchill took part as a young 2nd Lieutenant in the cavalry, but also served as “war correspondent” to The Daily Telegraph during the campaign. His book was pulled together from the columns he submitted.

The Indian border was somewhat fluid at that time – Pashtun tribes were raiding on the plains and the Russians had advanced somewhat, leading to fears of a Cossack attack. Then, in late July of 1897, thousands of native tribesmen laid siege to Malakand, a British outpost. A relief force was assembled under Sir Bindon Blood to punish the aggressors, many of whom had come out of Swat and Bunerwal which had not felt the force of British power and were spoiling for a fight. Among the weapons assigned to Blood’s force were new breech loading weapons. The campaign is also credited with inspiring Churchill’s understanding of trench warfare in WW1 and his support for the development of the tank. 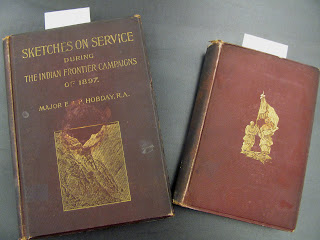 One of the narratives in the Chicksands collection which also details this campaign is A Frontier Campaign: a narrative of the operations of the Malakand and Buner Field Forces, 1897-1898, by the Viscount Fincastle, VC, Lt., 16th Queen’s Lancers and P.C. Eliott-Lockhart, Lt., Queen’s Own Corps of Guides. [London: Methuen, 1898]

Fincastle was Alexander Edward Murray, 8th Earl of Dunmore; he received the Victoria Cross for a daring rescue in August 1897 in a continuation of the campaign. This volume is illustrated with sketches by other officers accompanying the expedition, namely, Major Biddulph of the 19th Lancers, Captain Hewett of the Royal West Kent Regiment and Lieutenant Dixon of the 16th Lancers.

A second volume on the Malakand Expedition, also in the Chicksands Collection, is Sketches on service during the Indian frontier campaigns of 1897, by Major E. A. P. Hobday, R.A., 1st Brigade Malakand Field Force. [London: James Bowden, 1898] 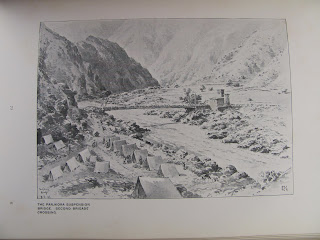 Edmund Arthur Ponsonby Hobday, Royal Artillery, was the Quarter-Master of the Malakand Field Force. A skilled draughtsman/artist, he wrote and profusely illustrated this volume. He later went on to illustrate a number of other published memoirs by fellow officers, including Service and sport on the Tropical Nile by C.A. Sykes, [London: John Murray, 1903], another volume in the Chicksands Collection. 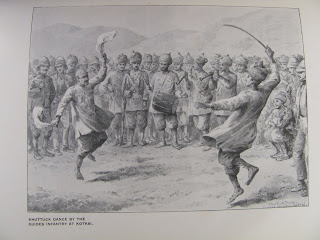 Scenes from Hobday's description of the campaign


Posted by Jan Roseneder at 2:21 PM No comments: